"Puppy Strangles" - it sounds like some weird psycho out stalking the pups, doesn't it? In fact, it is a not very uncommon medical condition that looks ugly yet is easy to treat. Juvenile cellulitis is it's proper name. As both names indicate, this condition is usually only found in puppies.

Over my 7 years of running San Diego Spaniel Rescue we had two cases come in, which provided my introduction to both the illness and the treatment. These two pups came into rescue via the shelter systems and were much too young to be away from their moms, let alone in a local shelter. The Strangles were obvious at this point - while there are earlier signs that a responsible breeder would have likely caught (and treated), these dogs had moved past those symptoms into full-blown cases of the condition. The Rescue vet recognized it right away - pus filled pockets covering the young ones' cheeks, lips and up close to the eyes. One of the most interesting facts that I learned was that the pus did not carry any infection - which meant home care was much easier during the recovery process for the foster parent!

Our vet told us that juvenile cellulitis is thought to be an immune-mediated disease. It is NOT caused by a lack of sanitary conditions at a breeder's home.

Best In Show Daily recently ran a great article on Puppy Strangles. That post has more information than I learned in my limited experience with the disease, including some of the very early signs that a responsible breeder might notice while the pup is still in his care. You can learn more by checking it out HERE. 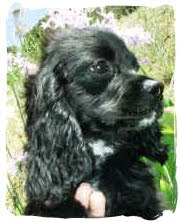 I don't have photos of Potter when he had his Strangles, but you can see from this bio photo that he recovered perfecly well!

Posted by DogBreedz - Pet Photography by Peggy Mundell at 6:00 AM