Prayers for Samurai the Cocker Spaniel 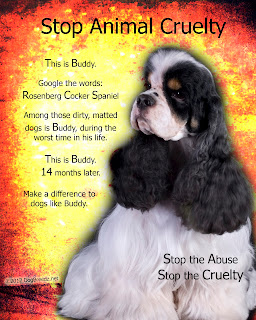 Unless you live near New Jersey, or are a dog lover connected to others on Facebook, you might not have heard this story. WARNING: while I'm not including photos, there are pix/video included in my link and the story is heartwrenching. Even for me, having been deeply involved in Rescue since 2002. My post is a slightly watered-down version, for those who might be more faint of heart.

A seemingly Good Samaritan couple turned a Cocker Spaniel into their local SPCA, claiming to have found him after seeing a garbage bag moving on the side of the road. Their reign as local heros was short-lived however, when it was discovered that the dog (at that time being called Morgan) was actually registered to the couples' address since 2007, under the name Samurai. IT WAS THEIR OWN DOG! Now, the Rescue Person in me is trying VERY hard to say "at least they finally gave Samurai a chance". During owner relinquishments that is the mantra that I kept in my head so I could be as civil as possible until the papers were signed, giving Rescue legal ownership of the dog they could no longer care for, or in some cases have never taken care of. But, if you click thru to the news story, you'll see that darling Samurai is fighting for his life, at only 8 years old. The accused couple, Keith and Shauna Morgan of Brick Township, New Jersey, have been arrested and face multiple charges of animal cruelty, neglect and abandonment and hindering an investigation. If Samurai doesn't make it, the charges will increase.

KUDOS to the local police, SPCA and the Red Bank Veterinary Hospital where Samurai is being treated and has a chance at life - a chance at a good life. You are my heros today!

You can find many news reports on this horrific neglect/abuse case by googling key words. My link to the ABC Local news story came from googling: wall county nj cocker spaniel.

If you know of someone who isn't able to take proper care of their pet(s), get to know them. Kindly offer education without judging - maybe they don't know the basics of pet care. If that doesn't help the animal, let the owners know about the local SPCA and area Rescues (find out first if the Rescue takes owner relinquishments, not all of them do - do the research for the owner ... for the pet). If the owners aren't listening or improving their care - report them to the local authorities. We have to look out for the animals, they don't have a voice of their own. Maybe, just maybe, we can help the animal into a better home before the neglect reaches a point of cruelty.

Posted by DogBreedz - Pet Photography by Peggy Mundell at 8:13 AM