Vestibular Syndrome In Your Dog 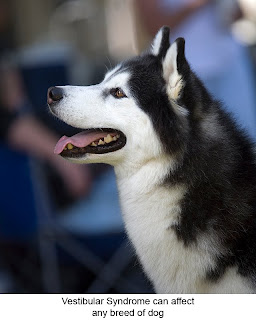 NOTE: This is just my experience with Vestibular. I am not a veterinarian and this should not replace any information or care you receive from your veterinarian!

I've had the honor of fostering many a Cocker Spaniel for San Diego Spaniel Rescue during the 8 years that I was the Director. And boy did I learn a lot during that time! Early on in my foster days, a darling blind Cocker in my care, named Lacey, had symptoms suddenly crop up. What was going on? She could only walk in unsteady circles (in one direction only), her head tilted off to one side, and her eyes were quickly moving from side to side, back and forth over and over again. Off to the vet we went, and I heard for the first time (but not my last) "Vestibular Syndrome". It is often called "geriatric vestibular" or "old dog vestibular" since it is usually found in our older canine friends, but this isn't always the case, and those names are misleading. I learned that there are usually two types of Vestibular: one caused by a brain tumor and another caused by ear issues or with no known cause. Some people will say that stress or trauma can preceed an onset of the symptoms. My vet told me that if it was originating in the brain, we would see the rapid eye movements (called nystagmus) going up and down, and if it was idiopathic (without a known cause) or inner ear related, we would see the eyes moving side to side. For Lacey's symptoms, that alone helped calm me down! I also was told that her case wasn't as severe as it might be ... in some dogs the loss of equilibrium is so severe that they actually roll over and over, attempting to regain their balance. 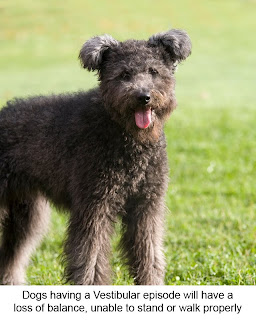 Symptoms come on fast ... that is part of what is so scary to me! There isn't a cure for the condition, but I could be sure I was on top of her ear cleanings in case it was inner ear related. The symptoms would leave on their own, my vet assured me, after anywhere from 2 days to 3 weeks. To help ease the vertigo for Lacey, there is a medicine called Meclizine - he could give me a prescription for it, or I could purchase it over the counter in the form of Bonine. Check with your vet for how much to give your dog. For most dogs, the symptoms won't return. Unfortunately for Lacey, this wasn't the case ... we dealt with it a few different times while she fostered with me but the Bonine always helped her thru the episodes.

If you Google "Canine Vestibular Syndrome" you will get a LOT of information - verify everything with your veterinarian tho! This blog post by Luisa Serrano is one that caught my eye, and includes videos so you can see what it looks like. 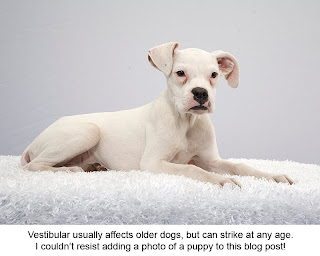